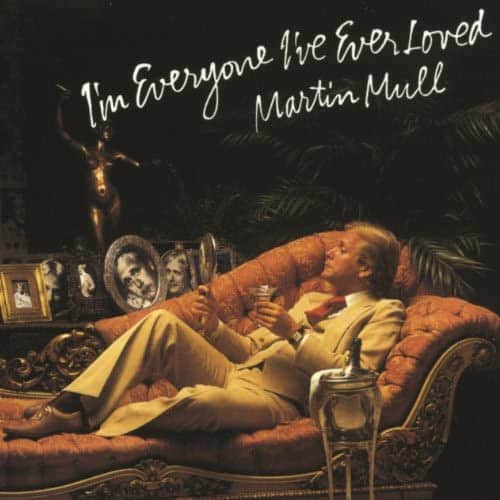 I was living in a cheap hotel in Richmond, Kentucky. My job at the car wash in a sketchy neighborhood in Lexington was done. My girlfriend had gone back to her guy, just out of jail. I was not eating regularly. The hotel provided me w/ a single room, a private bathroom, a bed, a desk, &, curiously, a radio—& the lobby had a big ice machine, so I’d fill my bathroom sink w/ ice & (when I could afford it) a 12-pack of (cheap) Pabst Blue Ribbon beer. It was all pretty depressing.

Yeah, some nights it was hard to sleep.

But one particular night, I had the radio tuned in to a local station, &, right at midnight, the DJ played an entire album by Martin Mull. I had never heard of Martin Mull at the time; now I know that he’s a successful actor, comedian, writer, &, yes, even a musician.

The album was called “I’m Everyone I’ve Ever Loved.”

Now, I don’t want to get all hyperbolic about this, but here’s the scene. I was feeling down, surely, but not suicidal. Let’s call it mildly depressed w/ pretty much a blank future to look forward to. No immediate potential for good things. No girlfriend, not much money, no prospects. Sounds to me like a dead end.
I’m not kidding, but this album changed the atmosphere I was living in. I felt like I was breathing clean air again. The music & words put the pep back in my step, the glide back in my stride. Seriously, it had that big an effect.

So why don’t I tell you about this music?

For this record, Mull develops a personality for himself. He’s simultaneously a womanizing narcissist & a drunken loser. Each pose elicits a wry smile & buckets of laughter. The lyrics are smart & the music is brightly recorded. The band itself sounds like a professional airport lounge jazz ensemble playing at LAX.

Of course, this is comedy, & the words are perfectly interwoven w/ the music, so I can give only a rough idea of the effect. Often Mull will argue w/ the company president (Rob Reiner) about the next song. Reiner insists that they need more songs or tells Mull that the next song is filthy & they can’t use it. In the latter case, Mull sings the filthy song but hums the words that might offend some. As you can guess, most of the words are hummed.
“Bombed Anyway” features the quite convincing Tom Waits as the bartender. In that one, Mull sits at the bar drinking himself into a stupor while thinking about the awful state of the world. He’s wondering which country will drop the next bomb, but he doesn’t worry because he’s “usually bombed anyway.”

In another, Mull insists that he wants to record an example of Philadelphia soul. What emerges is “The Boogie Man,” a real earworm & a marvelous recording.

By the way, Mull writes all the lyrics to these musical numbers & most of the music, additional tunes having been composed by pianist Eddie Wise. And Mull teams up w/ Steve Martin on the indescribable epic “Men.”

One of my favorites is “Honor Roll,” in which Mull goes out drinking every Saturday night. Of course he wakes up seriously hungover on Sunday mornings & therefore misses church; “That makes almost seven years, God save my soul,” he pines. He’s afraid Saint Peter’s going to be mad when he shows up at the Pearly Gates: “When it’s time for him to read that honor roll / I would have been in church, I would have / been in church, good God / But I was on a roll.”
The album ended. I sat & stared at the radio on the desk. I breathed in that fresh, clean air. Suddenly, my little room in a cheap hotel in a backwater town didn’t seem so bad. There were sparkles in the atmosphere.

These reflections should give you a pretty good idea of what the album’s about. I’m sure some of these songs are creeping around the internet somewhere. If you need a little pick-me-up someday, try to find one or two & see if I’m not telling you the truth. It might just put a little cut back in your strut.