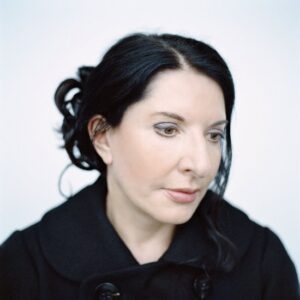 Performance Art is defined by Britannica online as “A time-based art form
that typically features a live presentation to an audience or to onlookers (as
on a street) and draws on such arts as acting, poetry, music, dance, and
painting. It is generally an event rather than an artifact, by nature ephemeral,
though it is often recorded on video and by means of still photography.”
Based on that definition, one of the premier Performance Artists of the
past five decades is Marina Abramović. Born in 1946 in the city of Belgrade
in what was then Yugoslavia, Serbia since 2006, Abramović has lived &amp;
performed all over the world, though primarily in Europe & the USA. Much
of her early work had to do w/ a ritualized & limited self-mutilation. Also, as
a twist, she occasionally allowed audience members to do whatever they
wanted to her. In a 1974 show, she placed 72 items—such as feathers, whips,
scissors, a gun—on a table. She sat passively in a chair & invited the
audience to have its way w/ her. After a slow start, people began to get
rough. After six hours, Abramović was stripped naked, cut & bleeding, rose
thorns pushed into her stomach. One person had pointed the gun at her head,
but another had taken it away.
This is some risky art. I’d like to focus now on something a little less
hazardous. In the spring of 2010, Abramović performed her piece The Artist
is Present in the atrium of the Museum of Modern Art in New York City.
For this piece, she sat every day, all day, for three months, in a wooden chair,
facing one audience member in another chair, a table between them, gazing
into each other’s eyes. During the three months, the show attracted roughly a
half-million people. Over 1,500 individuals, including Lou Reed &amp; Björk,
sat down across from her, & stared. Some wept; some induced Abramović to
weep. Some sat for five minutes, others for hours. Scores of people repeated
the ritual dozens of times. Sitters were asked not to speak or to touch her.
Lady Gaga later publicized the show. A Facebook group was
established, also a blog. In 2011, a video game was released. An
independent documentary film was broadcast on HBO & won a Peabody
Award in 2012. The Artist is Present lives on.

At least one of Abramović’s romantic entanglements began & ended w/
performance artistic flair. In 1976, she met the West German performance
artist Uwe Laysiepen, known as Ulay. They quickly became romantically &
artistically involved. They seemed to merge into each other, wearing
matching outfits, et cetera. They put on shows where they’d run & bump into
each other for an hour; drive a car around inside a museum; sit back to back
for 16 hours, their ponytails tied together; breathe back & forth into each
other’s mouths until they both fell unconscious after 17 minutes. They
decided to part in 1980, but in a dramatic & ceremonial fashion. Starting at
opposite ends of China’s Great Wall—Abramović at the Yellow Sea & Ulay
at the Gobi Desert—they each walked 1,500 miles & met in the middle,
which is where they said goodbye. Permission to do this wasn’t granted by
the Chinese government until 1988. In 2010, at The Artist is Present show in
New York, Ulay unexpectedly showed up, sat across from Abramović, &
reached across the table to hold her hands. A nice moment, face-to-face.