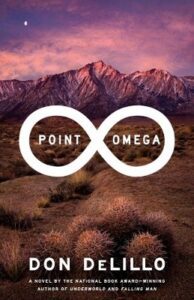 Way back in April, 2013, I sat down to read Point Omega (2010), a novel by
the noted American author (& native New Yorker) Don DeLillo. DeLillo has
been awarded numerous national & international prizes for his books, but I
had never read a word of his & decided to rectify that omission immediately.
The narrative starts out in an art gallery, probably in a big city I
figured, due to the presence of a security guard. In the middle of the room is
a large free-standing movie screen, “about ten by fourteen feet.” People
come in randomly, usually in groups of twos & threes, stay for a minute or
two, then leave. But in the back, standing alone against a wall, a man
watches the screen intently. Occasionally, staying against the wall, he moves
around to the other side of the screen, where he can see the images in reverse,
since the movie is shown on both sides. A man holds a knife in his right
hand—on the reverse side, his left.

The man leaning against the wall is watching a slowed-down version of
Alfred Hitchcock’s famed Psycho. The man holding the knife is Norman
Bates. Janet Leigh is in the shower. We know what is about to happen, as
the movie creeps along at about 1/12 th its normal speed, taking exactly 24
hours to show the entire film. There is no sound.

Reading, I imagine the man in the gallery, his eyes widening, watching
Bates, watching Leigh. The camera is inside the shower, & through the
shower-curtain we see the bathroom door open. A dark figure enters, holding
a big knife. All in excruciating slow-motion.

I recall being shocked by this scene in the book, imagining a real-life
psycho watching the movie, delirious w/ pleasure, experiencing vicariously
every cut & thrust of the blade. I had to find out if this slo-mo Psycho was a
real thing.
So I conducted an ad hoc research project & found out that, yes, it was
real. In 1993, a Scottish artist named Douglas Gordon devised the fiendish
film he called 24 Hour Psycho. The gallery show in DeLillo’s book was
from September, 2006, at the Museum of Modern Art in Manhattan.
Whether DeLillo was actually there to see the film I don’t know.

In the next chapter, the narrative veers off to the American Southwest,
Arizona or New Mexico. The connection w/ the 24 Hour Psycho is tenuous,
although there is a knife & either a murder or a suicide, no one is sure which.

In the final chapter, the man is still watching the film. The detective
Arbogast is falling down the stairs, having been fatally stabbed by Bates.
It’s the sixth & final day of the showing, & the man has been there for all six
days. Children enter the room, look around in curious confusion, not sure if
they’re supposed to be in there, then leave. Arbogast is still falling down the
stairs. The man meets a woman. They talk. They leave the gallery together,
through the revolving doors onto the night sidewalk. Abruptly, the woman
goes off alone. The man returns to the lobby, pays for another ticket so he
can watch the final half-hour of the film yet again, one last time. As the book
ends, he’s alone except for the guard, immersing himself in the slow action,
experiencing every glance & motion, wishing that the film could be slowed
down even more, even more.