Just listened to The Jess Novak Band & their new CD, A Thousand Lives, released on November
28th , just last week. First off, the music is wonderful. Every song is thoughtful. The lyrics tell a
story or present maybe a touchy situation in life. The music is so full & so varied, you know
when you listen that you are in the company of pros having a great time, & they’re located right
in Syracuse, New York. I had a lot of questions about the band & the CD. And then,
serendipitously, I bumped into Jess & we had the following conversation:

*
John Berbrich: Hey, Jess. How are you?
Jess Novak: I am totally overwhelmed, but really happy. Not only did we release a brand new
album, which is a fantastic amount of work, but we’re planning all of 2022; I’m working on
music for a movie, I’m already recording the next album (which is a solo electronic project), and
I have a book I finished in August that I’m editing. I am crazy, but so good.
John: Wow. I’m exhausted just hearing all that. Let’s start with the new album, A Thousand
Lives. It’s so rich. So many instruments: violin, trumpet, keyboards, & all the background
vocals, in addition to the standard drums, bass, & guitar. And your visceral passionate vocals, of
course. It’s just wonderful.
Jess: I’m a big fan of the Tedeschi Trucks Band and that’s always what I’ve modeled us after.
They keep that traditional big-band rock and soul sound alive, which the world will always need.
Also, in that Allman Brothers Band tradition, we have two drummers. I love paying homage to
my favorites in the way my band is formed. Another nod to TTB is the way there’s a female lead
with male back-up singers. That’s rare in mainstream music and something I’ve always loved
about them. Having seen them live, I also love that the backup singers often lead a few songs,
which to me, is the coolest thing a lead singer can do. People assume the lead vocalist is the best
because that’s what we’re usually presented with in popular music. But that’s definitely not
always the case. Everyone in TTB is amazing. Everyone in ABB was amazing. Everyone in
JNB is incredible. And all those bands have multiple powerful singers with different qualities.
The most important thing for me has always been having a band without egos where everyone
can shine in whatever role they’re in.
John: That’s true. On A Thousand Lives, no individual stands out. We hear sustained sonic
powerhouse guitar only in “Devil’s Walk.” Even the vocals, rather than being the showcase, fit
as an integral piece of the whole ensemble.
Jess: I always strive for equality, which pushes us into a whole other topic of women in music.
It has NEVER been my goal to expect something special because I’m a woman. It’s been my
goal to fit right in to what so many men do in bands, which is lead songs, write them, play
multiple instruments, solo effectively, etc. I never want to be the token female. I want to be
equal. That’s what feminism is to me—equality in expectation and delivery. Everyone has
different strengths, but there is no reason a woman has to say, I just don’t solo or I just don’t play
an instrument, without ever trying. You can do anything if you put your mind to it.

John: Tell me about the music for the movie.
Jess: It’s a project about the boxer Jack Johnson. He’s got such an amazing story and I was
invited to sing about it, which was an honor. They just wrapped filming so things are starting to
come together now. Look for Ghost in the House in 2022.
John: And what about your solo electronic music project?
Jess: For the longest time I didn’t understand electronic music. I thought it was a way out of
playing instruments, but really, it’s a super intense way to play every instrument—just in
different ways. I started building songs at home with GarageBand and got addicted quickly, so I
decided to make it a thing. I started recording in June and have been having so much fun
experimenting and challenging myself to step into 2022 with a new, more modern sound. It’s
actually overwhelming to walk into a studio and know you can make any sound happen in that
room.
John: So this goes beyond EDM?
Jess: What I’m doing is not EDM. It’s closer to a Billie Eilish sound, which I wouldn’t call EDM
but more electropop.
John: Oh, I like electropop. Now, tell me about your book.
Jess: During quarantine, I really dug into reading. I’ve always loved thrillers (I’ve read every
Michael Crichton and David Baldacci book) and got into a book group that pushed me into a list
of books that were thrillers, but most were from the female perspective, which was very cool and
different. That opened my mind up because so many of them were exciting stories, but also full
of thoughtful lessons about what it is to be a woman. Suddenly, I felt like I had a story bursting
out of me, so I sat down one day in May at 5 a.m. and started writing. I finished the first draft in
August and I hope to finish editing it soon. The book is about the reality of being a female
musician at a local level.
John: So this is fiction or non-fiction?
Jess: It’s fiction, but a lot of it is drawn from the many stories I’ve heard from female musician
friends and some of my own. As great as it is to chase a dream, I don’t think people realize how
honestly terrifying it is and I don’t mean that lightly. I mean, it’s actually terrifying for women to
be so open about where they are, who they’re with, what they’re doing, etc. We run a different
risk than men and sometimes it’s hard to explain that. I hope this book opens people’s eyes to the
realities we face and maybe even changes some behaviors.
John: Well, let me know when the book is finished. I want to read it. For now, we’re out of
time. Besides the movie, the electronic music, & your book, is there anything else for your fans
to look forward too?
Jess: We’ll release a music video for “The Key” soon and the new album is streaming now! I’m
hoping to finish the electronic project in the spring, so people can expect that next year. We’ve
also already booked so much of 2022 and the schedule is awesome—including some really big
shows far away from here… But I’ll announce that when we have all the details!

*also published in Up North Magazine 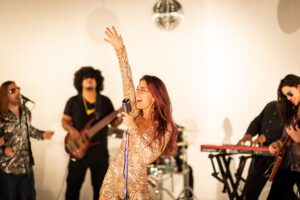 Jess Novak, takes no prisoners. With a fiddle on fire, powerful vocals and a fierce band behind her, this pop, rock, soul-pumped group from Syracuse, New York brings passion to every performance. Known for their energy, superb musicianship, engaging songwriting and ability to win any crowd, this is a band on the rise. Having touched audiences across the country – from Burlington, VT to Key West, FL to San Diego, CA – and with Novak playing more than 250 dates annually, the sound gets tighter with each show.

​Novak’s work is being played on radio stations worldwide (WTYT 960, D.C. Coast to Coast, Women of Substance Radio, IndieOutbreak) and written about at home and across the ocean. Novak has played such prestigious rooms as The Cutting Room (NYC), The Saint (Asbury Park) and Nectar’s (Burlington, VT), opened the 23rd Annual Chenango Blues Festival (with headliner, Ronnie Earl) and performed with groups and artists including Devon Allman, Tas Cru, Jimmy Hall, Ghost Town Blues Band and members of Butch Trucks and the Freight Train Band.