John Berbrich: When did you first start to write songs?

Jenna Clute: I began to write songs when I was around 11 or 12.  I always had the desire to start writing my own lyrics and figuring out a melodic line to sing along with them, but never got around to putting it to music until I was about 16 years old.  From there I started to expand on the lyric writing and assign basic chords to each part of the song I had written.  I still struggle with that aspect of songwriting, so now seek to collaborate on my songs when it comes to the production and instrumental aspects.

John: Who were your major musical influences at the time?

Jenna: I am very inspired musically by artists who have had an impact on my own personal and musical experiences, such as Demi Lovato, Miley Cyrus, Alanis Morissette, and Lana Del Rey.  I enjoy music that is kind of unique enough as to where it cannot be defined by one specific genre, but rather crosses into blends of multiple genres.

John: Can you describe the inspiration you get from Alanis Morissette, for example?

Jenna: Alanis is one of my newest inspirations musically, and what really made her stand out to me that I wanted to include in my own music is how she writes lyrics in such an authentic and raw way.  I also really feel her uniqueness is what I strive for as well.  I know when she first started out as a musician she often got a lot of negative comments made about her in the media because she didn’t fit into the box that society at the time had wanted her to.  I often relate that to myself, in my own judgments and backlash I receive by the risks I take with my music.

John: I remember when Jagged Little Pill first surfed the radio waves in the early 90s.  It was shocking, “raw” as you put it.  You’re right; Morissette didn’t fit into any box.  That takes courage.

Jenna: I definitely agree.  I was lucky enough to see her perform live recently and I think that even now her newer music is unlike any other.  She maintains a uniqueness that is consistent to her.  It’s so lovely to see.  It motivates and encourages me to trust in my own individuality and what makes my work unique as well.  I often fall into cycles of comparison, as I think we all do, but artists like her really allow me to reflect on my own approach to my art and recognize that it exists separate from others ideas or judgments.

John: I’ve listened to two of your original songs on YouTube & one or two covers.  The music & the videos complement each other very well.  I think that at least part of the message of “Satisfied” & “Broken Record” is fairly universal, although the songs are very different.

Jenna: Definitely!  I find whenever I write a song, it has to be authentic to myself and my life experiences.  While the songs tend to have universal messages, the music videos I make for each song is where the personal stories become more evident, and the metaphors I use within that to portray what it means to me.  However, I still leave that up to audience interpretation.

John: Tell me about writing “Satisfied.”  Was there some real-life trigger that inspired it, or is it rather the result of a lengthy accumulation of discouraged frustration?

Jenna: “Satisfied” is largely about my experience with creativity and success my whole life.  Just the continual pursuit to want to feel proud and content with yourself, your work, and life in general.  For me I always feel like I can see my next goal, and I expect once I achieve it that I will feel a monumental sense of relief and pride, but rarely does that ever happen that way.  More often it feels mundane and still not enough.  I think that with most of what I do, especially in the performance arts, I become hyper-fixated on the perception of my work rather than the gift that expression through creation can offer even on a small scale.

John: So do you then craft the song based on the expected perceptions of your listeners rather than just letting your creativity romp?

Jenna: No, I definitely don’t have the ability to create in that way.  Everything I do has to mean something to me first and foremost.  But when it comes to the actual lyrics I tend to lean on writing in a way that can be relatable to others as well.  I’m keen on metaphors, as they may mean something to me that someone else may interpret in an entirely different way.  That’s my favorite part about any art form in general.

John: What does “Broken Record” mean to you?

Jenna: That song was very cathartic for me to write, as it was my way of releasing the bitter feelings I had for those who had taken advantage of me in the past and continue to resent me even now.  It is very much an anthem of “revenge” but for me the vengeance is knowing that I no longer allow these feelings to reside in me.  The music video for this song my director and good friend, Ryan Hutchins, and I spent hours strategically mapping out the symbols and meaning that would add layers to the story and message I was trying to emulate in the song.

John: “Broken Record” is a powerful song.  I’d like to hear Alanis Morissette do a cover of it.  The video & music for each song is really different, yet absolutely true to the message.  Besides writing the words & the music, what instruments did you play?

Jenna: In my two singles I actually didn’t play any instruments.  I worked closely with a producer from New York City who goes by the name A-GO.  He’s magnificent.  He really heard me out and took the time to make sure my vision was brought to life.  It was nice to be able to collaborate as I don’t personally know much about the world of music production.  I was very glad we were able to find each other through the internet during the pandemic in order to create these two songs together.

John: That’s inspirational, working against adversity like covid to achieve your goal.  Well, Jenna, we’re out of time.  Thanks very much for participating.  Can we expect something solid, like an actual CD or an EP, in the future?

Jenna: I am hoping to release an EP within the next year if my schedule allows.  Regardless I will always be creating in some way; there is so much to be explored through allowing yourself the freedom to create.  Thanks John.

*also published in Up North Magazine 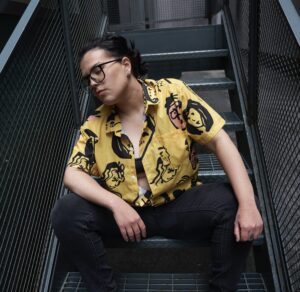 Jenna Clute, 23, is a queer singer/songwriter from the Akwesasne Reservation in Northern NY. She is a recent graduate from the State University of New York at Potsdam with a Bachelor’s degree in Psychology and Theatre. Currently she works as the Marketing Coordinator of SLC Arts, and is a very active beginner social media influencer. She largely focuses her content around music, the LGBTQ+ community, and mental health awareness. You can find Jenna’s work under her name, Jenna Clute, on YouTube, Spotify, Apple Music, Facebook, Instagram, and Tik Tok.