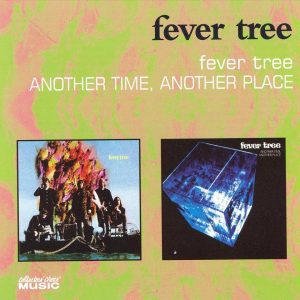 If anyone wanted to enumerate the top ten best completely forgotten albums by a rock band of the late 1960s, “Another Time, Another Place” by Fever Tree should certainly rank high on the list.

Fever Tree started out as a garage band in Houston.  After playing a variety of gigs along the Texas-Louisiana Gulf Coast, they moved in 1967 to Los Angeles & in 1968 recorded their first album, simply titled “Fever Tree.”  This was a funny record, half hard & half soft.  The hard songs included “Where Do You Go?” “Man Who Paints the Pictures,” & their biggest radio song, “San Francisco Girls (Return of the Native),” plus their version of wicked Wilson Pickett’s hit tune “Ninety-Nine and one Half.”  The soft songs were slow & placid, featuring piano, gently plucked guitar, & even orchestration.  Next came “Another Time, Another Place.”

But first let’s introduce the band.  The lead singer is Dennis Keller, a mysterious figure w/ a raspy voice.  Keller’s official bio says that his birthplace is “unknown,” which certainly adds to the mystery.  On lead guitar we’ve got Michael Knust (known on recordings only as Michael).  He was apparently inspired as a lad by attending live performances by Jimi Hendrix & Eric Clapton, which accounts for much of his ethereal, experimental guitar work.  Thumping the bass is E.E. Wolfe III, a solid & steady performer.  The guy who really gives the band class is Rob Landes; his elegant organ, flute, clavinette, & piano perfectly fill in any dead spaces & set the mood for every song.  Mean-faced drummer John Tuttle can slam the snare as hard as anyone, but he also knows when to pull back & just cool it.  Together, this ensemble always plays as a synchronized unit, particularly on their second album—oh, one more thing: husband-wife team Scott & Vivian Holtzman write most of the lyrics & seem to act as inspirational gurus for the band.

Anyway, now for “Another Time, Another Place.”  The album kicks off w/ a remake of “Man Who Paints the Pictures” from their first record.  When they recorded the song on their initial album, it sounded to me like a mad, rapid march, a little dark & sinister.  They slowed down its pace on their second album, creating a classic nearly-seven minute FM radio monster.  The song has everything: husky vocals, intriguing lyrics, wild forward-&-backward guitar, oceanic organ, savage drums, lurking bass, varied tempo.  It’s really a masterpiece, followed by “What Time Did You Say it is in Salt Lake City?” a group party song w/ honky-tonk piano apparently about a guy (stoned or drunk) stuck in a Georgia airport while he’s trying to get to Utah.  We’ve all been there.

“Don’t Come Crying to Me Girl” sounds exactly like you’d expect.  The guy has little pity or sympathy for the girl, but in truth we don’t know much about the particular situation.  Next up is a fairly steamy version of “Fever,” a song earlier popularized by red-hot Peggy Lee, that displays singer Dennis Keller at his vocal best.  Side One closes w/ “Grand Candy Young Sweet,” a brief powerhouse that features Keller experiencing extreme lust.

“Peace of Mind” starts out gentle too, but don’t worry—the pace picks up quickly, the whole band charging forward aggressively.  Which bring us to the album’s closer, “Death is the Dancer.”  Drums & bass tap out an insistent beat—you can tell that something great is about to arrive.  And it does.  And it’s a smart song, too—kind of about social justice, but really bigger than that.  It’s sort of an angry & disillusioned shout at the cosmic void, the vast hungry maw that awaits us all at the end of our days.  This is capped by a coda of gleefully insane piano, the kind you don’t hear very often.  It’s exciting & an absolute curtain-closer.

Well, if you plan to list the top ten best completely forgotten albums by a rock band of the late 60s, “Another Time, Another Place,” by Fever Tree gets my vote.