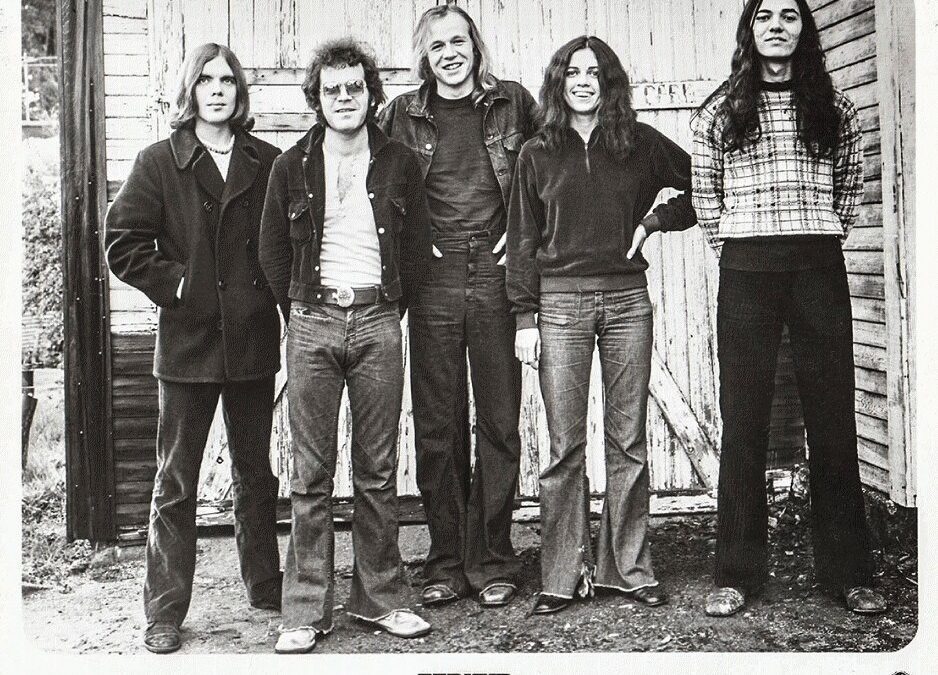 Zephyr was a rock band (w/ blues & delightful jazz tendencies) from Colorado that lasted from 1969-1971 & recorded only two albums; the first album, the eponymous “Zephyr” (1969) is a mostly-forgotten gem. Let’s take a good look at the band members, then we’ll examine the songs, one by one.
The leader & frontline performer here is Candy Givens, lead vocals & a pretty mean harmonica (played sparingly). Candy loves to shriek & screech, sometimes overdoing it a bit, which gets a little annoying. She’s got kind of a thin voice which sounds a lot better when she’s in control of it. Still, she sings w/ a tremendous amount of energy & a whole lot of sassy charisma. She co-writes about half the songs, probably lyrics.
On guitar is the flashy youngster Tommy Bolin, who was only 17 when this album was recorded. He can burn & grind & shred. He can also play sweet & gentle, like moonlight on a calm lake surface. He’s co-writer on roughly half the songs. Tommy didn’t quite make it into the 27 Club, dying at the tender age of 25.
On piano, organ, & flute we’ve got the diminutive, bespectacled John Faris w/ the fluffy hair. John’s keyboards participate fully w/ Bolin’s guitar. The organ swells & rises & fills out the sound.
Candy’s husband David Givens plays bass & like most of the members co-writes about half the songs. His bass is unspectacular but steady & always right where it needs to be.
I can say the same for Robbie Chamberlin on drums. He’s unspectacular, but always right there. And sometimes those drums step out in front perfectly, crashing a climax or building a crescendo.
The entire band plays well together, each instrument going for extremes but never getting completely out of control. And now for the songs.
Side One starts w/ “Sail On,” dramatic blues-rock, which features a furious instrumental break in the middle & a sonic train wreck at the end. The lyrics are like all of Candy’s lyrics: She’s in a relationship, which is either failing or just starting—or she’s in the middle of a really good one.
Next up is “Sun’s A-Risin’,” more blues w/ guitar & organ, plus Candy’s passionate harmonica.
Back in 1961, Dee Clark had a big hit w/ “Raindrops.” Zephyr covers that song here, & it’s probably the least successful piece on the entire album. It features Candy Givens at her most shrieky, trying too hard to be emotional.
Next we get a cool urban jazz instrumental called “Boom-Ba-Boom,” written by bassist David Givens. It’s short, showcases Bolin’s ripping guitar, & leads directly into “Somebody Listen,” a blues number w/ Candy on desperate & convincing vocals.
Which brings us to Side Two, kicked off by “Cross the River,” the best song on the album. It’s a powerhouse performance by the entire band, featuring a delirious jazzy instrumental in the middle, fierce guitar—flute, organ, bass, everybody gets a turn—tempo changes, best voice on the record.
Another cover is “St. James Infirmary,” a blues standard previously done by dozens of artists. Candy certainly sounds anguished, though a bit over the top.
The band has some fun w/ “Huna Buna,” a VERY suggestive jazz number. The sound is tight & exuberant, the voice sexy & fun-loving.
The album closes w/ the big “Hard Chargin’ Woman.” Candy declares that she needs to roam a bit, seeking temporary lovers out of curiosity & a sense of freedom. The music begins slow, ominous, & dark. The voice is in control, moderate & determined. There’s an unaccompanied guitar solo in the middle—rapid, flashy, & wild. The song speeds up, slows down, then accelerates to a grand climax. At eight minutes & forty seconds, it’s the longest song on the album & it deserves to be the longest.
If this sounds interesting, check out Zephyr online. There a sort of controlled wildness in their sound that can be quite stimulating. And Bolin truly could have been one of the greats.